What does determine the scanning resolution, is it the camera resolution or projector native resolution?

Also does using an LCD projector give bad results? Why do DLP projectors are always prefered?

Rashiga wrote: ↑13 Oct 2019, 15:04 What does determine the scanning resolution, is it the camera resolution or projector native resolution?

In the process of creating my scanner, I tried several different cameras with a resolution of 0.9 MP to 5 MP. At the same time, only one camera had a rather large diagonal (1/2 "at 3MP) and a relatively low level of digital noise - but because of the extremely low (8-9) fps, I had to abandon it. The 1.3MP Logitech camera had a very bad lens, and gave too much distortion, the other camera (high-speed, 120fps) was unsuitable for scanning due to the very strong compression of the video in MJPG, the latest 5MP cameras with a 1/2.5 "matrix also produce very noisy surfaces, besides, the more megapixels, the both the optical scanning stage and the processing A noisy signal only exacerbates the problem, and greatly increases the number of "extra" polygons in the model.
I think that it is optimal to have a camera with a good lens, a resolution of about 2-3MP and a large (2/3 "or 1/1.2") matrix with a low noise level. The projector resolution is preferably not lower than HD (1280 * 800), but, for example, using a 4K projector, I think, is impractical in principle.


Rashiga wrote: ↑13 Oct 2019, 15:04 Also does using an LCD projector give bad results? Why do DLP projectors are always prefered?

I did not have a projector with an LCD matrix, and I do not think that the projection quality will be worse than that of DLP. I just read that LCD projectors are quite prone to matrix dusting, due to the nature of the cooling design.
The DLP matrix does not tolerate dust at all, so they are in a sealed box with the lens module. And they have external cooling.
Soft: RangeVision DIY, Calibration panel/Rotary tables - RangeVision, Prj: Byintek UFO R9, Cam: Daheng Mercury MER-630-60U3M-L (USB3.0, monochrome) x2, Obj: ZLKC HM1628MP10 (F2.8, 10Mp, 16mm) x2 & Azure 3518M3M (F1.8, 3Mp, 35mm).
Top

What OBN said. the function of the projector is to project the vertical and horizontal lines on the subject. the cameras read the distortion as the image falls across the surface. since the patterns are vertical and horizontal the projector resolution isn't extremely critical. once you get over HD you are wasting $. to me the more important factor in projectors is the orientation of the mirrors (DMD) in the DLP array. Most cheap projectors have Diamond pattern DMD arrays. Square arrays are preferred for scanning as they give better definition to the projected line pattern edge. As for cameras. matching the lens to the camera resolution is important. lens distortion, especially in cheap lenses, is a factor. Lenses also have what is called the OTF which is the fidelity of the transferred light information across the width of the image (Sharpness and fineness of the image detail). There is no point in having a 12mp sensor if you using a lens made for 1mp cameras. Name brand DSLR lenses are very good in this department.

Given the choice, I'd spend $ on camera and lenses over an expensive projector.
µ
Top

Thank you @Micr0 and OBNRacerMan, for the information you have provided.

In summary, theses are the key components to achieve a better scan.

1. A lens with lower distortion.
2. Method of image compression of the camera.
3. Camera sensor with lesser noise.
4. Projector with a decent resolution.

For my setup, I have one Chinese CMOS camera and a Canon 80D DSLR. However, I'm waiting for the lens to arrive for my CMOS camera.

Once I have proper scans I will share them in this thread.
Top

Any tips for scanning small objects size ranging from 5 to 6 cm max length.

What I want to know is. is it necessary to do what I'm doing? Or the usual projection straight out of the projector is enough in order to capture small details.

My projector allows you to focus from about a distance of 100mm, giving out a field of about 90x50mm in size. There is still a problem with the placement, so you have to scan from a more distant distance - about 150-200mm.
When I tried to scan the coins, they occupied only a small part of the frame: 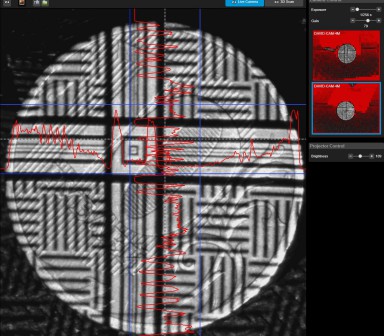 This is what the coin looks like on the scan screen

And this is the final merger

WOW! those scans look sooo neat! What's the projector you use?
Top 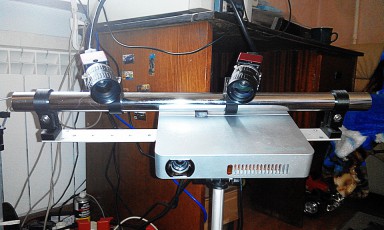 Also there were bought two sets of 5mp (very compact YW500U3 Camera and larger in size - and "just" YW500U3) cameras and lenses for them.
In the picture there are YW500U3 Camera
P.S. Do not pay attention to the name of the cameras in the screenshot of the program in the previous message - I temporarily renamed them, trying to "trick" the program

How did you rename the cameras? Did the software use the David drivers by doing this?
Top
Post Reply
37 posts