Which equipment do you use for 3D-scanning?
Post Reply
27 posts

I'm a avid photographer so I have alot of background with the hardware. Originally I intended to use my 7D but the limitation of live view streaming just doesn't cut it, and i'm not about to buy a 2nd slr to run a stereo so i went with something cheaper until a more affordable 2k or 4k becomes readily available.

My current setup changes all the time but the adaptability of the arca swiss rail system makes it similar to building lego. I've also attached it to a LCD swivel arm for more mobile to capture the odd angles so all i'm lacking now is a stepper turn table but will have to make due with a Lazy Susan.

There still parts on the way so it's bound to be changed again; with a new Universal L bracket on the way i'm trying to make the projector mount more stable and less susceptible to vibration.

Double Dove tail Panoramic clamp (for each camera and projector, doesn't seems to be sold anymore and it's the most pricey piece out of everything)
http://www.ebay.ca/itm/Double-Dovetail- ... CE:CA:3160 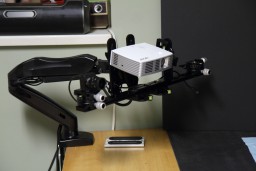 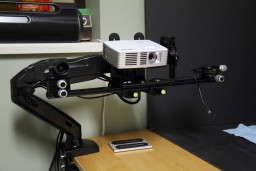 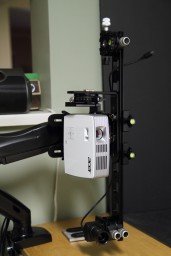 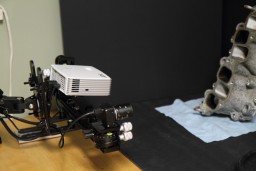 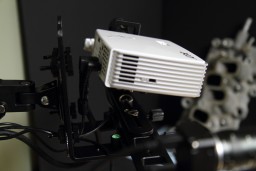 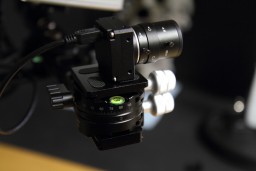 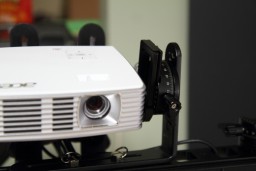 And here I though the hardware for my rig was getting out of hand....

Idealy i'd really like to machine a shaft so i can mount that swivel arm into a heavy duty video tripod with wheels so i can scan large size objects like cars on the go. But i'm worried about the balance so placing a HTPC and UPS at the base ought to secure it.

My 2nd C1 camera came from Kurokesu but i only have one lens to go with... with my current 2.8-12mm the focal lenght is too short, I need at least 16-18 if i want to use a prime lens but i don't see much offering for CS mounts. I can't even find an extension tube for this if i need to reduce the minimum focus distance. I have a 12mm and 14mm CS fix lens for cheap but i'm worried about the depth of view being to thin, they were dirt cheap ($4 each) so it isn't quite a loss. May have to move up to C-mounts since theres more option there and i have a 25mm on the way. Having dual camera is nice but damn it makes everything else 2x more expensive.
Top

I did say my setup is like lego no? My 2nd Kurokesu C1 camera came so it's semi complete minus the correct lens. Saulius Lukse who sold me the camera sending me a replacement rear cover so it can have the etching on it. It would bug the hell out of me if this setup isn't as symmetrical as possible

This is using L brackets to turn it into portrait mode or deep bore scanning. I'm missing a pair of clamps for the camera to vertically align it dead center of the projector. Now my only problem is the freak'n projector is white..... 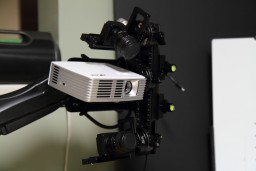 W/o the rail clamp the camera won't be dead center from the projector, where it sit is close but i have some on the way. 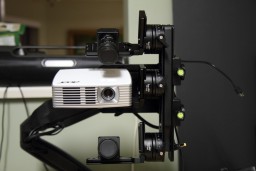 Side view, the projector is on a pre-determined angle of 14deg to counter the keystone so it will always be perpendicular to the rail 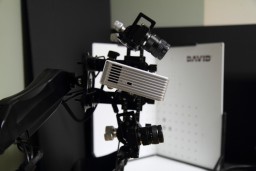 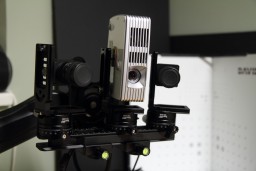 Wow, the flexibility is really impressive!

Im envious! If you buy everything new, it's not cheap, but I guess you had many parts anyway.
Top

It can be cheap if you shop wisely and buy what you need unlike me who just bought stuff for the sake of "just in case" most the pieces are sub 5 to 20 dollars while the rails vary in lenght,

Out of all the pieces i think the panorama clamp and the swivel arms are the most costly aside from the d5/camera/lens/projector. I don't regret it since i think still way ahead of what David is offering while being cheap and flexible (that pre made swivel arm from david is $$$$).

Once i get the correct focal lenght lenses i'll start cranking the scans to make some money on automotive stuff, i'm a car nut aside all things with a v6 mr2 in tow so i'm not only a meticulous mechanic, i'm an avid cad designer, wiring guru and once in a wihle photographer. In the foreseeable future i'd like to start a business so I would at least like my setup to look professional

About optics: I found the computar 12mm F1.4 optics, which David is using for 25..50€ on ebay. That is with a lot of patience. I think it took me around 3 months.
I have the feeling, that resolution of cameras and projector are not the limiting factors in my setup, but it is mainly the shallow depth of focus of the projector and the different focal planes of projector and cameras. So I think, 4K cameras will mainly increase demand for diskspace and processing power.
Top

That's what I'm thinking too, the projector pattern files are something low res like 800x600 so if it's true you don't need a high resolution at all and just have a smaller aperture lens to have more focused/sharper zebra stripes projected. These things are suppose to project to a flat wall so depth of field is going to be shallow.

12mm is too wide for my 1/3 cs sensor so i need something narrower like 16-20 which they don't usually come in. I try to stay out of zoom lenses since they have an inherited distortion flaw and being less sharper than a fixed FL prime. I can reduce the minimal focus distance on the lens but not on the K132 unless i tear it open to put a spacer in it
Top

hmm, i'm surprised. I also use the K132 and the DMK 23UX236, which has a 1/2.8 sensor, so even a bit larger than yours. But i feel i would need a shorter lens, because the beamer image is quite much bigger than the camera fov.

edit: does C-mount vs CS-mount make a difference? I don't think so, but...
Top
Post Reply
27 posts